According to mythology, Toroni was wife to Proteus, son of Poseidon. The ancient city was founded by Chalkidian settlers probably during the 8th century BC. Its strategic location and rich resources developed Toroni into one of the most significant cities in Chalkidiki, giving its name to the gulf that forms between Pallene and Sithonia peninsulas. During the Greco-Persian Wars it allied with thePersians, who as a reward gave Olynthus to Kritoboulos, a local ruler in 479 and later became part of the Athenaean League, contributing one of the most high taxes that reached the 12 Attic talents per year, giving a reference to its prosperity. When the Peloponnesian War broke out, the Athenaeans placed a garrison in the city fearing a revolt against them, but that did not stoped Brasidas, theSpartan general to seize the city with a surprise attack during the night, after he came to an understanding with the Toronaeans in 423. He then tried to expand the city's walls by including the harbour suburb (Προάστειον), before leaving to attack Amphipolis. However, the Athenaeans recaptured Toroni under Nicias, just before the return of Brasidas, who was 2 miles away.. When the war ended, Toroni, leading member of the Olynthian synoecism, became part of the Chalcidian League that was formed, which included most of the peninsula's cities.

After 348, and the abolition of the league by Phillip, Toroni became part of Macedon. In 168 the Romans invaded and the city decayed, but did not seized to exist as the harbour fort, Lecythus, indicate, since it was rebuilted during Byzantine era. It is also a titular see in the Roman Catholic Church. The site continued to be reside of people up to the 17th century, when the population abandoned the old city and moved to where the modern town of Toroni is sittuated, approximately one km north of the ancient city. Its strong walls and other buildings were destroyed in 1903, when the Ottomans used the city's granite stones to cover some central roads of Constantinople andThessaloniki.

The Lecythus fort. View from northeast

Traces of prehistoric settlements of the 3rd century BC and many other ancient remainders, earlyChristian and Byzantine temples, castles and other are evidence that the area is inhabited constantly from the Neolithic era. Surveys have been contacted by the XVI Ephorate of Classical Antiquities in 1975, while the harbour port, Lecythus (Λήκυθος), is currently under refurbishment. The ancient city extends in three main areas, the Acropolis located to the rocky and extremely bluff hill between Porto Koufo and Lecythus, which was connected with the city via long walls, the main ancient city, in theplateau southwest of acropolis up to the coast, that includes Lecythus fort and the Proasteion(suburb) of the city, in the today's narrow, but in antiquity much broader neck of the land that connects Lecythus and the city.

In the Acropolis and the main city, parts of the fortification are clearly visible along with dispread stone blocks, ancient pantiles and broken pottery which are found everywhere. Unfortunately, most of the city's buildings were destroyed in the beginning of the 20th century, when the Ottomanauthorities hired an Italian engineer in order to collect the stone blocks to use them as paving in roads. The Lecythus fort, next to the harbour, was rebuilted during the Byzantine era, along with cinsternsand a small early Christian temple.

Parts of the ancient city, including most of the Proasteion, the agora and the ancient harbour are nowadays sunk 35m from the coast, as the underwater surveys have proven, since a large 60m long and 2m wide foundation was found, propably the ancient seawall. The whole area between this foundation and the modern coastline is scattered with stoneworks and large amounts of pottery, which indicate the presence of large buildings. All these are concluding that this is the area that the Athenaean garrison fortified when Brasidas seized the city, according to Thucydides' accounts.

Special emphasis was given by the excavators to the cemetery during the inhabitance of the Iron era. Its duration is approximated to be from the end of the 2nd century till the middle of the 9th century. In this cemetery 134 tombs were discovered with 118 being cremated and 16 simple burials. There were 500 pots discovered which were used either as burials or as cremators for the dead. 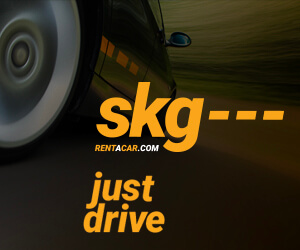 Useful info ΤΟΡΟΝΙ is 140 km. far from Thessaloniki and you can come here by car, taxi...
╱╲